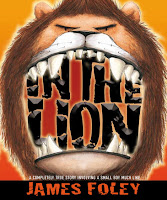 In The Lion by James Foley
Published August 2012 Walker


I have started to think that perhaps I have a problem.  My two favourite picture books at the moment involve animals eating people. I will start with this one, In The Lion.  I think that the title and the cover give a fair indication of where this book is headed, without even opening the book.


Front and back endpapers:

The idea is simple, the text is simple and the illustrations are vibrant.  The story is about a small boy, Richard, who visits the zoo with his parents and twin siblings.  While at the lion enclosure, Richard sees that the lion is making a meal of the zoo staff...it's not until he's had the dentist and the hairdresser do his parents even notice! 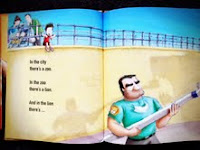 The lion is on a mission, and he will not stop until he has had his fill.  While everyone has run away in a panic, one small boy thinks that he can save the day.  This book is so much fun, and children will love it.  I won't give away the ending, but rest assured it is a satisfying one.

This is the second book by James Foley, the first being The Last Viking by Norman Jorgensen which he illustrated, In the Lion is the first he has written and illustrated, and I am sure it will not be his last.

If this sounds like the book for you, then there's even a very cool book bag being given away when you buy a copy (book bag numbers will be limited, so get in quick before they run out). See below for the book bag, everyone will want!

Who will like this book: Boys and girls age 4+
Read it if you like: Whatever by William Bee