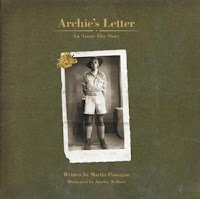 
On Anzac Day 2010, a 96-year-old man in Hobart, a returned soldier from World War II, wrote a letter to the local paper thanking the people who were going to that morning's dawn service. Who was this man? Why did he write this letter? Archie's Letter tells the story of an ordinary man who went off to fight in World War II. His experiences included surviving the Burma Railway, where he was under the command of Australian war hero, Weary Dunlop. Archie's Letter also tells how he dealt with his wartime experiences; how, at the age of 91, he agreed to meet a group of elderly Japanese women interested in world peace; how he could never forget the young men who were with him during the war and who didn't come back.


As my readers come from all over the world, I will begin by explaining what ANZAC Day (April 25th) is, the day that we remember all of those who have fought and died in war.  For more information, please click on the National War Memorial  link below.

This is a non fiction title, my first for the year.


I saved this book for ANZAC day because I thought that today's post should be a special one.  There are a number of books published for children about ANZAC day, but I chose this one because of the story behind the story.

Of the 22,000 prisoners of the Japanese Imperial Army 1 in 3 died in captivity.  In 2010 less than 1000 were still alive.  Archie Flanagan was one of them.  In 2010 at the age of 96 Archie Flanagan thought it was too difficult to attend the Dawn Service, so he wrote to his local paper thanking those who did go.

There have been many books written to commemorate ANZAC Day and while this isn't maybe the most beautifully written, it is an amazing story.  The book talks of Archie's time during the war, most significantly his time in a Japanese Prisoner of War Camp.  He, along with many others, worked on the Burma Railway and he tells of the difficult time and the many who died.  There he was under the command of Weary Dunlop, who was placed in the same camp, and his presence really helped him through the hard times.


The book continues on until the end of the war, and Archie's journey home.  There is also a brief look at Archie's life after the war, his marriage, children and career.  In 2006 a group of Japanese women asked to meet with Archie.  Although he had not spoken to a Japanese person since his return, he agreed to meet the women, who were survivors of Hiroshima.  Archie believed that people had to work at getting  past differences, and one of these women Archie now considers a friend.


It's very eye opening to read about what 'ordinary blokes' went through for our country.  This is just one story, and there are so many more.  Like all terrible times in history, it's important to tell the stories and remember, in the hope that it won;t happen again.

Usually I write my posts the night before they go up, but today I am writing it and posting it in the  same morning.  I am doing this because this morning I went to my first ever Dawn Service.  Shocking really, that I have never been, but I can say that it won’t be my last.  I decided to go this year after reading today’s book Archie’s Letter.  Going to the Dawn Service has not been something we did in our family.  And I guess it’s like so many people, it’s not because we didn’t care, or want to show respect, it’s probably because it wasn’t something I grew up doing.

So today, as well as talking a bit about this book, I will also share with my experience of the Dawn Service along with some photos.


After an early start (4.30am wake up), I headed off to my first Dawn Service.  I went to the one in the city, and I knew that it was going to be big, but when you see the crowd it is quite amazing. There were families, babies, lots of young people in groups, and of course soldiers, young and old.  I was very excited to be there, it felt good to be part of something so big, to be surrounded by people that had forgone their midweek sleep in to pay tribute to those who fought and those who died fighting.  I got a bit teary during the bugle playing the last post, but I didn't get as upset as i thought I would. My first Dawn Service will most definitely not be my last. See below for a few photos from my morning. 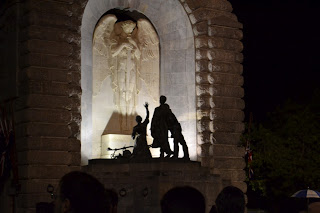 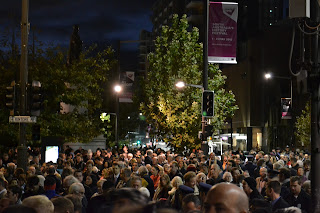 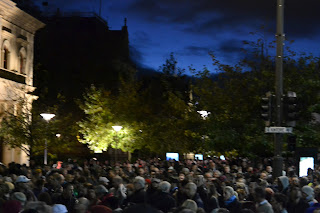