176. The Chronicles of Harris Burdick by Chris Van Allsberg 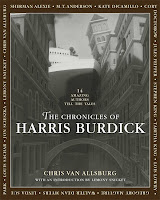 From the publisher:
This inspired collection of short stories is based on the original illustrations of Chris Van Allsburg in his esteemed and mysterious The Mysteries of Harris Burdick, and features many remarkable, best-selling authors in the worlds of both adult and children's literature: Sherman Alexie, M.T. Anderson, Kate DiCamillo, Cory Doctorow, Jules Feiffer, Stephen King, Tabitha King, Lois Lowry, Gregory Maguire, Walter Dean Myers, Linda Sue Park, Louis Sachar, Jon Scieszka, Lemony Snicket, and Chris Van Allsburg himself. Van Allsburg's Harris Burdick illustrations have evoked such wonderment and imagination since Harris Burdick's original publication in 1984; many have speculated or have woven their own stories to go with his images. More than ever, the illustrations send off their eerie call for text and continue to compel and pick at the reader's brain for a backstory - a threaded tale behind the image. In this book, we've collected some of the best storytellers to spin them. 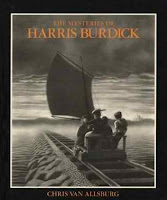 The name Harris Burdick may be familiar to you.  Chris Van Allsburg wrote another picture book many years ago called The Mysteries of Harris Burdick.  This book comprised of 14 images and 14 titles with a short caption beneath each one, that was it, not actual stories.  There's an introduction in the book explaining that the mysterious Harris Burdick had left the pictures with a publisher, saying he would return with the stories he had written, only he never returned.

This new book uses the same 14 pictures that were in the original book, but in this book e have stories.  Each illustration was given to a well known author, and they have written their own story, inspired by the picture that they were given.  The result is some very strange stories, not surprising really when you see some of the images, they are eerie.

I won;t talk about all of the stories, but the ones that struck me the most were, Just Desert by MT Anderson and The House on Maple Street by Stephen King.

In Just Desert, a young boy has always been told that he mustn't travel further than a certain point in his home town, he should never go past Lunt Street.  When Alex finds himself in a strange neighbourhood one day (past Lunt St) he notices things are weird, leaves didn't fall from the trees, streets disappeared into a flat line of light.  On one visit past Lunt St, Alex brings home a pumpkin, just like he was asked to do, only this pumpkin feels very light.  When his mother sees the pumpkin she knows Alex has been past Lunt and decides to tell him the truth.  There is NOTHING past Lunt Street, Alex is the last person, the last human, everything in his world is created to give the illusion of a world that doesn't exist, he can't go past Lunt, because they haven't finished creating it yet!

In The House on Maple Street, the Bradbury children live with their mother and step father.  The step father is not the kindest man, and the children do not get along well with him.  One day the children begin to notice strange changes in the house, there seems to be some kind of metal 'growing' in the walls of the house, slowly encapsulating them.  When Trent finds equipment and gadgets counting down in the basement, he figures out what he thinks is going to happen, and makes a plane to free themselves from the step father,  The house is turning into a rocket, and when the countdown concludes the house will 'lift off;, so they need to make a plan that  enables themselves and their mother to be out of the house, and their step father inside.

This title will become a firm favourite, especially with teachers.  It could be used on it's own, or in conjunction with the original picture book.  It's probably worth noting that you can actually buy a pack that contains the prints, they are larger than the picture book illustrations, and would work well in the classroom because you can give the pictures to individual students/groups to look at more closely.  A couple of excellent resources to prompt what would be some very interesting creative writing!

Who will like this book: Boys and Girls age 11+
Read it if you like: The Mysteries of Harris Burdick
Posted by Rebecca at 09:00