250. Mr McGee and the Elephants by Pamela Allen 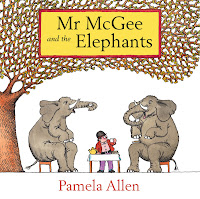 
Here's another adventure of Mr McGee, this time with elephants, one, two and three.
A chance to perform and share the fun, so come and join in everyone.
From the one-and-only Pamela Allen comes a new adventure in the life of loveable Mr McGee. With its jaunty rhyme and lively illustrations, this is Pam at her classic best.


After the interesting picture book we had earlier his year from Pamela Allen, I was a bit wary of a new one.  This one though, features the ever popular Mr McGee, so I didn’t need to be too worried.

Mr McGee lives under his apple tree, and on e sunny day he thought he would stand on a chair stacked on a chair, standing on a table.  While he was up there, a rumbling made the chair and table fall to the ground leaving Mr McGee stuck up the tree.  The rumbling was caused by three elephants, who use their height and trunks to free him from the branches.  To thank them, Mr McGee invites them to tea, although one greedy elephant has other ideas.  What happened next involves Mr McGee being flown through the air, landing in mud, and frightening the greedy elephant away!

All of this is told in wonderful rhyme that children will love.  The other part that younger readers will love is when Mr McGee gets covered in mud, and scares away the elephant, because they will know that it’s not a creature from the deep, but only Mr McGee!  The Mr McGee books are a tried and tested favourite, so it may not have nudity in it (Like Mr McGee and the Biting Flea, the favourite of most readers!), but it will be a winner.
Who will like this book: Girls and boys age 5+
Read it if you like: Mr McGee