271. This Moose Belongs to Me by Oliver Jeffers 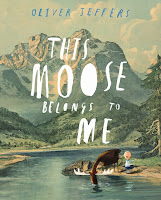 
"Wilfred owned a moose. He hadn′t always owned a moose. The moose came to him a while ago and he knew, just KNEW that it was meant to be his. He called it Marcel."
Most of the time Marcel is very obedient, abiding by Wilbur′s book of extensive rules on how to be a good pet. But sometimes he doesn′t quite seem to be listening, plus he has a tendency to wander off wherever he pleases when they go out walking. But Wilfred is still very proud to have a pet like Marcel.
Until one day, deep in the woods, someone else seems to recognise Marcel! Is Marcel really Wilfred′s pet after all?


I am a bit of an Oliver Jeffers groupie, well a lot of one actually, and while I was planning on only featuring one book by any given author this year, I couldn't let this one go by, and it's hardly my fault if an author manages to publish more than one book a year.  So here it is. 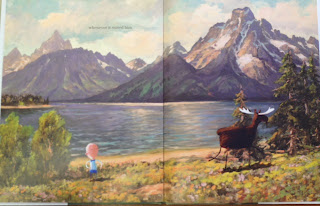 Oliver Jeffers never fails to make me laugh.  I love the rules that Wilfred has bestowed upon his pet, there are rules that the noose has no trouble following, Rule 11: Providing shelter from rain, Rule 4: No making too much noise while Wilfred plays his record collection.  And there are others which are a challenge to the moose, Rule 7: Going whichever way Wilfred wants to go, and  Rule 7 (subsection b): maintaining a certain proximity to home.  What do you do when your moose doesn’t follow the rules…adapt the rules!

Oliver Jeffers is well know for his simple, unfussy illustrations, where the characters are at times the only thing that appear on the page, with no background to speak of.  One of the things you will notice about this book is the distinct presence of a detailed landscape.  A big change for Oliver Jeffers, you may think.  Well no, not really.  The landscapes are actually courtesy of the estate of Alexander Dzigurski, and American/Yugoslavian artist who died in 1995.  The double page spread shown below shows the characters on one side with a white background, and the same characters with the landscape behind them on the other. 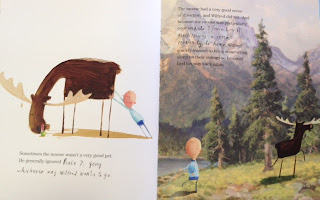 As an ex teacher, and someone who sells books to teachers and librarians, I will always find myself seeing how a book could be used in the classroom.  It’s not something I do consciously, it’s just the way my brain works.  The best thing about this book is that it can be used on different levels, and they are my favourite kind.  For young readers, it’s a story about a boy with a pet moose, that’s funny in itself, but the fact that the moose does pretty much what he wants just adds to the laughs.

Those teachers who want to use it with older students could have a field day with the discussions this book would prompt.  What does it mean to ‘own’? When you lose something does that mean it isn’t yours anymore?  If you can own an animal, can you a own a person?

However you look at it, this is a book that left me smiling, and anything that makes us smile has got to be a good thing.


Who will like this book: Boys and girls age 5+
Read it if you like: My Penguin Osbert by Elizabeth Cody Kimmel