315. Falling to Ash by Karen Mahoney 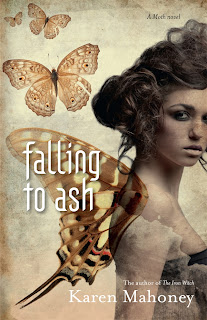 Falling to Ash by Karen Mahoney

From the publisher:
Being a vampire is for life -- not just a lifestyle. A brand-new series from the author of The Iron Witch Marie 'Moth' O'Neal is an eternal teenager, cursed to live out her life as an eighteen-year-old vampire and shunned by her strictly religious family. Her Maker, Theo, prizes her as his best Retriever and sends her on increasingly difficult missions. That's how Moth finds herself investigating the suspicious deaths plaguing a group of Otherkin kids in . The 'kin like to live the vampire lifestyle, but they've managed to attract the attention of a dark force that's slowly picking them off one by one. Then the dead teenagers start to rise again-as something other than vamps. Who knew that zombies actually existed? Now Moth has to infiltrate the Otherkin without them figuring out that she's the Real Deal, find out who or what is transforming them into the walking dead, all while keeping resident vampire hunter Jason Murdoch from shooting anything that doesn't breathe. It doesn't help that she and Jace have a history, and the sexy young hunter feels he has a lot to prove-and a score to settle...

I thought I was just about done with vampire books, but here I am.  To be honest, it was the cover that drew me to the book before I even knew what it was about.  There’s a bit of Buffy and Angel about this book, a vampire and vampire hunter thrown together, but it’s more of a murder mystery that just happens to have vampires in it.

There was actually a short story of the same name in a book called The Eternal Kiss: Vampire Tales of Blood and Desire edited by Trisha Telep, it’s in this story that we meet the newly turned vampire, and we see her father turn his back on her, he doesn’t know that she is a vampire, but he has noticed that she hasn’t aged a day in the last year.

She has to drop out of school, and live an isolated existence for the last year, so when there’s news of a mutilated body, a body with it’s throat torn out, Marie, or Moth as she is now known, takes it upon herself to investigate.  When she reaches the hospital morgue, she is not alone, Jace, son of a well know vampire hunter is there to check out the corpse too.  Imagine their surprise when the dead body is not lying on a gurney as they had expected, but he’s walking around, making a meal of a nurse!  The boy has become a zombie, or something quite like it.

The prime suspect seems to be Moth’s maker, but she is sure that can’t be true, so her mission is to prove his innocence and find the killer. So begins the journey of this unlikely pair as they try to figure out who is behind the murders. While there’s not the Buffy/Angel romance, there is a definite connection between the two, a connection which Moth struggles with, as she knows nothing good can come of their friendship.

On the front of the jacket it say A Moth Story, so I can only assume that this means there may be more on their way.

Who will like this book: Girls and boys age
Read it if you like: The Eternal Kiss: Vampire Tales of Blood and Desire edited by Trisha Telep