26. My Rhinoceros by Jon Agee 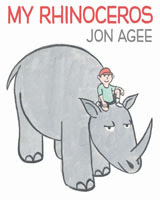 From the publisher:
﻿If you should ever get a rhinoceros for a pet, you're in for a surprise. It won't chase a ball. Or a stick. Or a frisbee. In fact, according to the experts, a rhinoceros does only two things: pop balloons and poke holes in kites. But don't be discouraged. As you'll discover in Jon Agee's hilarious picture book, rhinoceroses can do more-so much more-than that!


When our young protagonist takes his new hippopotamus home, he is disappointed that he doesn't do anything fun.  When he finds out about the balloon popping and kite poking he takes him to the park, to see what he does around the balloons and kites...nothing...maybe he should have bought the hippopotamus.  On his way home however the rhino gets his chance to shine, and he even has another skill that the boy wasn't expecting!
This is my favourite kind of picture book, funny and slightly ridiculous.


Who will like this book: Boys age 5+
Read it if you like: My Cat, The Silliest Cat In The World by Giles Bachelet

See what Jon Agee has to say about his new book: