197. The Fury by Alexander Gordon Smith 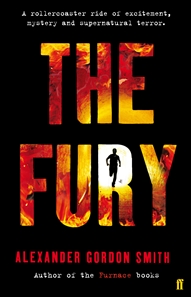 From the publisher:
, Brick and Daisy are three ordinary teenagers whose lives suddenly take a terrifying turn for the worst. They begin to trigger a reaction in everybody they meet, that makes friends and strangers alike want to tear them to pieces. These victims of the Fury - the ones that survive - manage to locate each other. But just when they think they have found a place to hide from the world, some of them begin to change ... They must fight to uncover the truth about the Fury before it's too late.
But it is a truth that will destroy everything they know about life and death.

From the first few pages I knew I would be in for a ride.  The beginning is quite graphic, and moves very quickly.  A teenage boy has concerns that his friends and family have e started treating him differently, not speaking to him, acting as if he’s not there and he catches them looking at him almost fearfully.  The next thing his mother and sister have attacked him, and a stranger  comes crashing through the window to join in the attack…the boy dies, as he watches his mother calmly go and make a cup of tea.

Each chapter is told by a different character.  We have Cal, Brick and Daisy to begin with, all who have been attacked, but have managed to escape.  When they realise that this is happening to many more teenagers, they put a call out and try and keep everyone together and safe.

There are also chapters from the police.  They have a body that is for all intents and purposes, dead.  Except it seems to be breathing.

The book will appeal to readers who love the GONE series by Michael Grant.  It has a lot of similarities.  Children/teenagers having to survive on their own, an unknown evil to keep at bay, and the fact that the characters involved seem to be developing some extra abilities.

Daisy starts seeing things before they happen, and she can also hear people’s thoughts.  They also seem to have the ability to direct other like them where to go, because soon more children start turning up, not knowing why, only that they were drawn to this place.

I am fairly confident that this is going to be a series, because I didn’t find as many answers as I had hoped, and to be fair neither do the characters. We learn that they have been chosen for a reason.  I can’t give too much away without spoiling the moment when they find out what they are, but it does start to question the difference between good and evil.  They have thought all along that everyone else was evil…but is this the case?  There’s also the question of the ‘dead breathing body’, he is somehow linked to all of this, but  at the end of this book, we still don’t know how or why.

No big surprise to say that there’s a fair amount of violence in this book.  When the Fury takes over, people are unstoppable in their desire to kill these children, so there are beatings, gouging, choking, limb dismemberment, bodies being run over and shootings.  There is however no bad language, so that’s a bonus!  It is an absolute door stopper of a book, at 544 pages, but the readers who can’t get enough of these kinds of books will not be put off by the size.