From the publisher:
Max is dinosaur mad. He knows everything about them. If only he could meet a real one! So when an ancient fossil whisks him away to an incredible land full of dinosaurs, he can't believe his luck. There, Max meets a new friend called Fern who needs his help with a sick baby dinosaur. Can Max use his dino expertise to save the day?


This is a sure way to get your little dinosaur lovers reading.  A book about a dinosaur mad boy, perfect for dinosaur mad readers.

Max loves dinosaurs and he collects fossils, he is thrilled to find an ammonite fossil, that was millions of years old.  The fossil was not only ancient, but magic.  That night, as he was getting ready to sleep, the fossil started glowing and humming...next think you know, Max finds himself in some kind of desert.Not only is Max in a desert, but when he has a closer look around he realises that there are dinosaurs everywhere!

Just as he saves himself from a stegosaurus attack, a girl about his age appears. When we first met Fern, alarm bells started ringing in the back of my mind.  I am no dinosaur expert, but I am pretty sure that dinosaurs and humans did not inhabit the earth at the same time.  Fear not, Max hasn't actually gone back in time, he has ended up in Dinosaur Land, it's the place where dinosaurs ended up when they became extinct in the human world.

This is the first book in a new series, so far books 1 and 2 are out, with the third due mid year.
The front and back cover opens up in this book to display a dinosaur land map, and in book 2 you get dinosaur stickers to create your own dinosaur scenes.


See below for an image of the inside front cover and a look at the inside of the book itself.  I have put the age at 7+, but younger dinosaur lovers would like it too, so would be a good series to share. 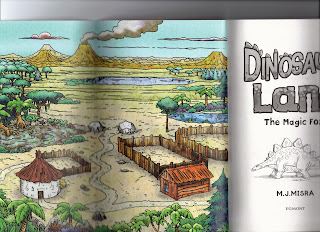 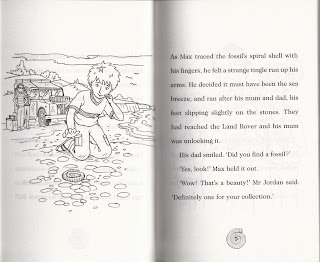 Who will like this book: Boys and girls age 7+
Read it if you like: Dinosaurs
Posted by Rebecca at 09:00