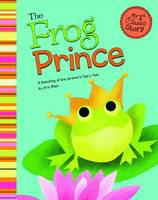 A retelling of the classic tale of a beautiful princess who makes a promise to a frog which she does not intend to keep.

This book is one of many on a new series.  There is a preface in this title and in each of the others that says there have been many versions of this story, and the following tale is a retelling of the original version.  The story has been cut for length and level, the basic elements of the classic tale remain.

So far we have received 8 titles in this series, and I will list them at the end of the post.  I chose The Frog Prince specifically because it is a childhood favourite of mine.  I am sure I had a copy, but it must have been lost in one of many moves because I don't have it now, and I don't remember what edition it was.  The thing that sticks in my memory about this book is the golden ball, for me it was all about the golden ball, so I can only imaging that my edition had a pretty good looking golden ball.

In this edition, like the preface states, the story is aimed at young readers, which I love.  Fairy tales and traditional stories are loved my the very young, but they are often extremely wordy and not accessible for young readers to read for themselves, these are.  See below for an example of the internal layout of the book (it's from Lion and the Mouse, which we haven't seen yet, so I am not sure if it's out in Australia yet) 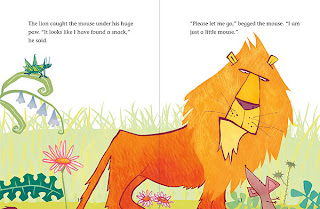 AS for this particular story The Frog Prince, it does contain all of the elements of the traditional tale.  For me the illustrations are disappointing.  The books in this series are illustrated by a number of different illustrators, some more that appeal to me more than others. Illustration is a personal preference, and for me the very cartoon like illustration, doesn't suit the grandness of how this story feels to me.

Apart form my own personal nit pick, the series is fantastic for younger readers, and teachers/parents who want a simple version of these beautiful tales to share with their students or children.


Who will like this book: Girls and boys age 6+
Read it if you like: Fairy Tales
Posted by Rebecca at 09:00