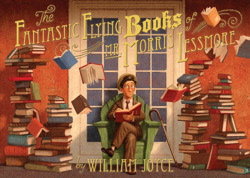 From the publisher:
The book that inspired the Academy Award-winning short film, from "New York Times "bestselling author and beloved visionary William Joyce. "Morris Lessmore loved words. He loved stories. He loved books. But every story has its upsets. "Everything in Morris Lessmore's life, including his own story, is scattered to the winds.  But the power of story will save the day. Stunningly brought to life by William Joyce, one of the preeminent creators in children's literature, "The Fantastic Flying Books of Mr. Morris Lessmore" is a modern masterpiece, showing that in today's world of traditional books, eBooks, and apps, it's story that we truly celebrate--and this story, no matter "how" you tell it, begs to be read again and again.

I think that this would have to be THE book for the National Year of Reading.

The proofs were shown to me in April and I LOVED it, and that was just colour copies on A4 paper.  Now that I have the actual book I am so excited.  I manage to restrain myself from buying too many picture books for myself, but this is one for all book lovers adults and children alike.  It actually gave me goosebumps, and that doesn’t happen very often.

The animated movie of The Fantastic Flying Books of Mr. Morris Lessmore won and Academy Award for best animated film in 2011.   It confused me a bit because I had read that this was the book that inspired the film, but how could that be with the film coming out in 2011 and the book in 2012?  After a bit of digging I discovered that Joyce wrote the story based on his mentor, children’s book publisher William Morris (Harper Collins).  Joyce wrote the story on a plane as he was visiting Morris, told his friend the story, and Morris died shortly after.  Joyce then made the film based on this story, and now has written a ‘real’ picture book version.

The illustrations have a real 1950s style to them, although the book is not set during any particular time period.  The use of colour is also clever in that the characters are all black and white, until they get a book, and then they become coloured.  It’s whimsical in that the books fly, but the whole point of the book is that stories are the things that bring life to people, and show them the world, even when their world might be the one small town they spend their whole lives.

Again, like with Wonder earlier this year, I know my words cannot do this book justice, so I just suggest you go out and get your hands on a copy.

Here's a sneak peek at some of the pages, and the further don the page I have added the 15 minute short film.  Enjoy!

As an added treat here is the award winning animated short film.  I apologise in advance if the film doesn't work, I have already had one version become unavailable!