201. Too Many Elephants In This House by Ursula Dubosarsky illustrated by Andrew Joyner 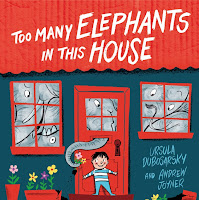 
From the publisher:
In Eric's house there were too many elephants - in the living room, in the kitchen, in the bathroom, even in his bedroom!


This book is the ultimate escape into a child’s imagination.  Eric LOVES elephants.  Eric reads books about elephants, draws picture of elephants, and has an elephant magnet on the fridge…there were elephants in every room in the house.  When his mother tells him the elephants have to go, Eric wonders what he will do?  He has an elephant in the living room, to help him with blocks, an elephant who reminded him to brush his teeth, even a herd of elephants that sang him to sleep.  Eric ponders over all of the possible ways in which he could get rid of the elephants, each idea has its flaws, the one thing that that Eric decides, is to get a box…a BIG box.  With a little creativity Eric turns this box into an elephant house…and one by one all of the elephants go into the elephant house.  Problem solved.  Anytime Eric wants to play with the elephants he shouts “Come On Out, Elephants!” …and out they came.

This is a book that will get something new from every time you read it.  The last page is one of those…aaahhh pages, so I won’t spoil it for you.  To give a clue, it is quite similar to the ending of My Bear Griz, which I read earlier this year. I would be interested to hear what children think of that last page.

One of the things I really like about this book is that Eric is so happy. He has this great big smile in nearly every illustration (at times he is puzzled, trying to solve his elephant problem), and it feels like a real celebration of being young and the joys of imaginative play.  If only it was as simple as house full of elephants to make us that happy now!


Who will like this book: Boys and Girls age 5+
Read it if you like: My Bear Griz by Suzanne McGuinness
Posted by Rebecca at 09:00