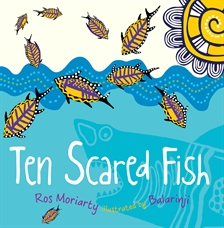 From the publisher:﻿Simple, intelligent, bright and cheerful, this early childhood concept book introduces animals and numbers and celebrates indigenous art in a joyous, non-didactic and playful way.

The illustrations are clear and bold, and for a simply counting book, there is a linear story line, as we head from the waterhole to the sea.  I also really like the way the new animal was introduced on the page before we get to that number.

At the back of the book , there is a translation of the story in the Yanyuwa language, which is spoken by Aboriginal families in Borroloola, Northern Territory.  It's also worth noting that a proportion of the income from sales of this book supports Indigenous pre-school literacy through Indi Kindi. Click on the link below for more information.

Who will like this book: All pre-schoolers
Read it if you like: An Australian 1, 2, 3 of Animals by Bronwyn Bancroft
Posted by Rebecca at 09:00