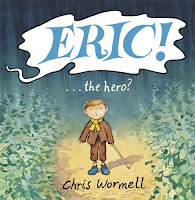 From the publisher:
Eric is a little boy who sometimes gets things wrong. But Eric learns that while you can’t be good at everything, sometimes it takes a little time to find out what you are good at. And when a huge monster stomps down the mountain to Eric’s village, Eric just might have his chance to shine…

Eric is the boy from the village that everyone knows, because he is always doing things wrong. He is a twit, a nitwit, a dunce, a dummy and a dope.  That's what he is told on a regular basis.  When a monster STOMP, STOMP, STOMPs his way towards the village, the villagers flee in fear.  Shouting that the only person to save them would have to be a twit, nitwit, dunce, dummy and a dope...Eric thinks that maybe he is the hero for the job.

When he meets the monster and stands up to him, he finds that he has more in common with the dreaded monster than he would have thought.

My one concern about this book, is the fact that he was called so many bad names, by other children and by adults.  It's not something you really want a young reader to think is OK.  As an adult reading the book I did have to question that aspect of the book.  What I have concluded, is that it shows no matter how you are treated, or how badly you may feel about yourself, you have to believe in yourself and give yourself the opportunity to shine.  A lovely story about changing the way you are viewed by others.

For an extra special sneak peak, see below for Christopher Wormell's reading of Eric!