346. Where Things Come Back by John Corey Whaley 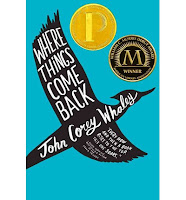 From the publisher:
In the remarkable, bizarre, and heart-wrenching summer before Cullen Witter's senior year of high school, he is forced to examine everything he thinks he understands about his small and painfully dull Arkansas town. His cousin overdoses; his town becomes absurdly obsessed with the alleged reappearance of an extinct woodpecker; and most troubling of all, his sensitive, gifted fifteen-year-old brother, Gabriel, suddenly and inexplicably disappears.  Meanwhile, the crisis of faith spawned by a young missionary's disillusion in Africa prompts a frantic search for meaning that has far-reaching consequences. As distant as the two stories initially seem, they are woven together through masterful plotting and merge in a surprising and harrowing climax.

This book has won a multitude of awards, so I hoped I wouldn’t be disappointed, given all of the hype.  I wasn’t disappointed, but it is quite a sleepy story.

It’s a story that starts off in two different places.  Each one seeming separate, until it gets to a point where you realize how the two story lines are about to merge, and then it’s a bit of a WOW moment.

The central story focuses on the town of Lily where Cullen and his brother Gabriel live.   It’s a small town and anyone who’s different in a small town tends to stand out, and this is the case for Gabe who is quite unique.  He likes music by bands no one has every heard of, he is smart, thoughtful and still chooses to believe that the world is a good place...and then one day he goes missing.  He goes missing during a time when there are strangers coming to town, ornithologists who are interested in the possibility that the Lazarus woodpecker is alive, thought to be extinct.  The town actively search for Gabriel for a few weeks, and then life just gets back to normal, for everyone except those close to Gabriel.

The second story starts with a missionary called Benton Sage who while working in Ethiopia learns of the Book of Enoch.  It's this piece of scripture that puts Benton on an unexpected course, and he becomes obsessed.  His obsession leads him to his college roommate Cabot Searcy, who takes over this cause after Benton's death means he couldn't.  I found myself fascinated by theses chapters. At first interested, and then as their obsession deepens, it started to get pretty creepy.

There are elements of The Lovely Bones in this book, although unlike that story, we as a reader don’t know what happened to Gabriel, that all becomes clear towards then end.  What we do see is how one group of peoples lives go on , when one important person is gone.


Who will like this book: Boys and Girls age 15+
Read it if you like : a glimpse at small town USA
Posted by Rebecca at 09:00