353. Marvel Ready-To-Read Level 1: This Is Spider-Man by Thomas Macri

From the publisher:
When Peter Parker is bitten by a radioactive spider he becomes super-agile and amazingly strong. He makes a disguise and calls himself Spider-Man. Sometimes, though, keeping his superhero identity a secret isn't easy.

Little boys LOVE superheroes, but there’s often a big difference between the age appropriateness of books about superheroes and the age of the children who love them.  Now that problem has been solved, as we have three new ready to read titles all about our favourite heroes.

This book is a perfect introduction to Spider-Man.  We are introduced to Peter, a High School student who lives with his Aunt, is bullied at school, but he has a secret.  This secret involves a costume, a web shooter and lots of webs. 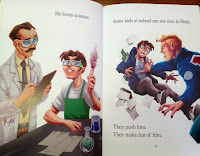 The story in this book is basic, and that’s the point.  There are one or two short sentences on each page, and each page has an illustration that supports the text.  On the page ‘He loves science’, Peter is in a lab with a test tube and he’s smiling.  The illustrations are bold and clear, and as it’s been published in conjunction with Marvel, the Spider-Man image is just like the one readers would know from the comics. 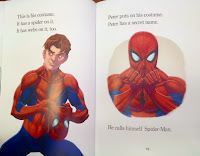 Books about super heroes may not be everyone’s idea about what constitutes great reading material, and in a literary sense it isn’t…but if this is the book that turns a non reader into a reader, then it’s value is clear.