From the publisher:
When Buzz and his family have dinner at a fancy hotel's restaurant Fly Guy isn't allowed in. After searching through the hotel's garbage Fly Guy smells a wonderful aroma coming from the restaurant's kitchen. Fly Guy causes some messy mayhem in the restaurant and, in the end, everyone needs a bath!

In this adventure Buzz and family, including Fly Guy are staying in a fancy hotel.  It’s so fancy that Fly Guy isn’t allowed in the restaurant, because no one wants a fly hanging around their food.  Buzz is sent out into the night and all he finds is a lot if horrible stinky rubbish.  Most flies would be overjoyed at such a bounty, but not this fly, he wants something nicer. 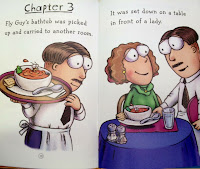 A delicious smell leads Fly Guy to the kitchen where he finds himself in the most lovely soup, perfect for a Fly Guy bath.  The only problem is that the diner who received the soup was not so happy with the bathing fly, in fact she shrieked and jumped causing her soup to fly, which then caused a neighbouring diner to shriek and throw his hands in the air, causing his soup to fly…and so the chaos begins, resulting in everyone being covered in soup! 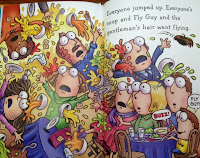 Ever since the very first fly guy book Hi, Fly Guy! Book was published in 2005, young readers haven’t been able to get enough of these books about Buzz and his pet fly.  They work well because they are bright, funny and have chapters.  Chapters are very important to readers moving on from picture books, as it makes them feel very grown up!

Who will like this book: Boys and girls age 5+
Read it if you like: Fly Guy
Posted by Rebecca at 09:00