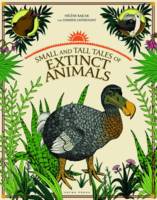 
From the publisher:
Country of Origin: France A fascinating journey around the world of extinct animals, combining cartoons with naturalist drawings, and mythology with science. Did you know there was once a beaver that was two metres long? That the elephant-bird really did exist? And that the dodo once had a life beyond the pages of Alice in Wonderland? Have you heard of the megatherium, or the glyptodont or the tratratratra? Through legend and mythology, anecdotes and scientific facts, the authors tell fascinating stories of the strange animals that disappeared before our time. The book is a tragicomedy, and a mind of information for everyone interested in the animal world.


This book really has the WOW factor.  It's only my second non fiction title for this year, but as soon as I saw it, I knew I had to read it.  It's an adventure into the weird an wonderful world of animals that are no longer with us.

At the beginning of the book, there is an introduction that briefly explains how the impact of humans and environmental factors have affected the natural world we live in. The book is then divided up into The Americas, Africa, Eurasia and Oceania.


The format of this book is what makes it so unique and interesting.  Each animal is given a double page spread.  On the left is a comic strip style illustration, that either tells the story of a particular explorer/historical figure or tells of the myths that surround the particular animal.  The right hand side is a traditional naturalist style illustration, that has a paragraph of information, a few interesting facts and then an area that shoes the size, weight, where it's found and when it became extinct.  See image below for an example. 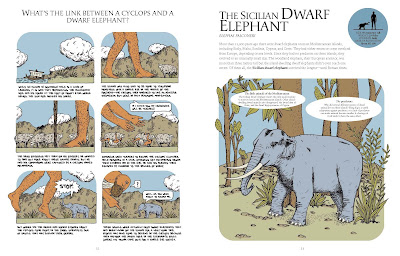 There are amazing animals in this book, such as the Irish Elk, whose antlers could grow up to 3 metres from base to tip.  The giant beaver, that isn't actually related to the modern beaver, and Steller's Sea Cow that tragically became extinct only 30 years after it was discovered.


This book gives an insight into how these animals lived and it talks about the factors that caused it;s extinction.  For many of the animals it was human contact, but there are a number of changes to environment and climate which also played a part.


I highly recommend that you track this book down and have a look.  I guarantee you will learn something new...and that's a good thing.


Who will like this book: Anyone who is interested in animals and nature
Read it if you like: Interesting and beautiful boks
Posted by Rebecca at 09:00